CEUS for guidance and monitoring of interventions

Large pedunculated lipoma of the esophagus: a case report [Mar 2019] 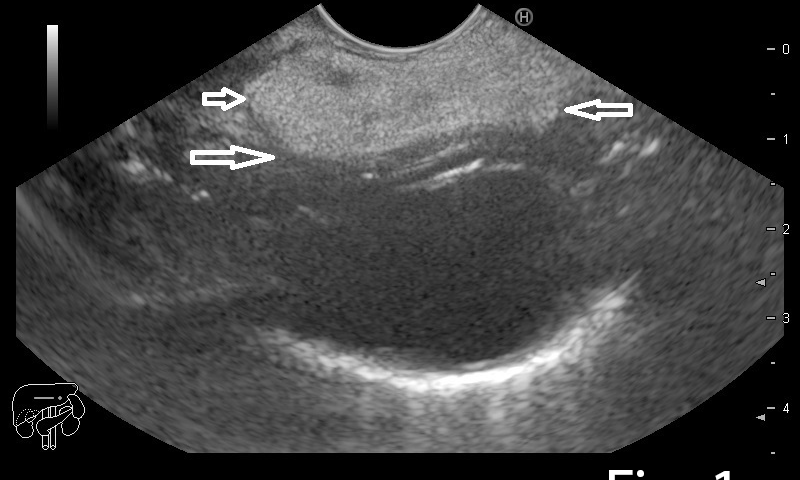 Large pedunculated lipoma of the esophagus: a case report 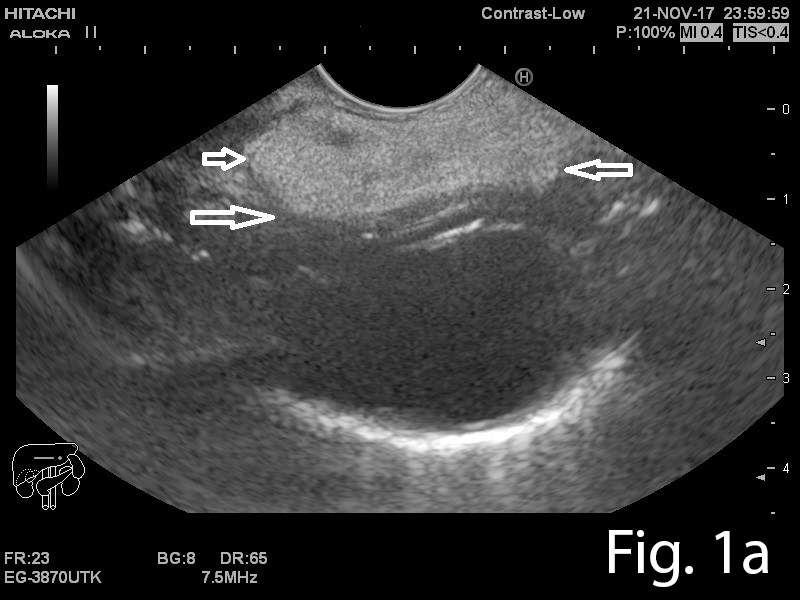 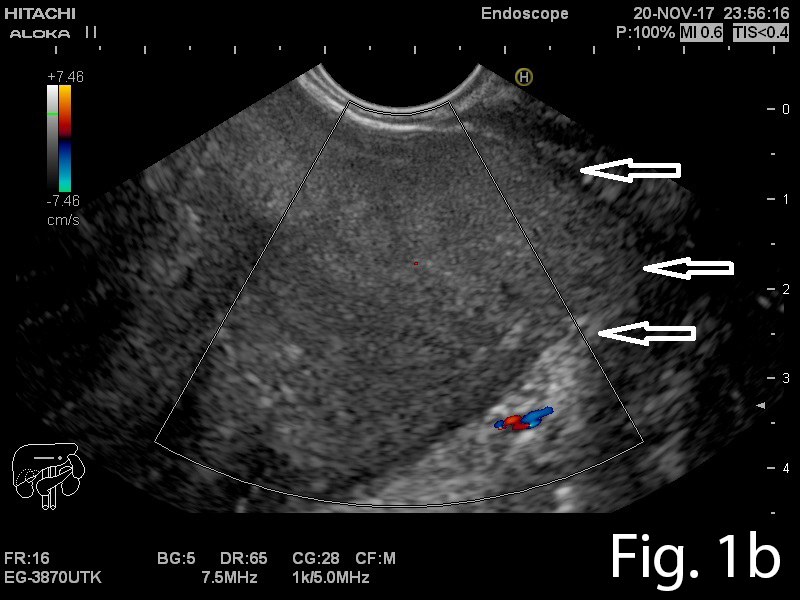 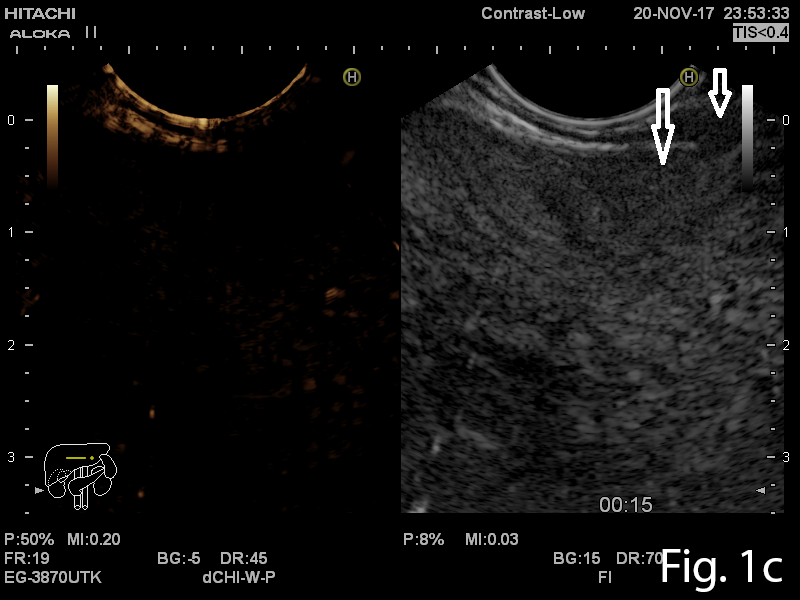 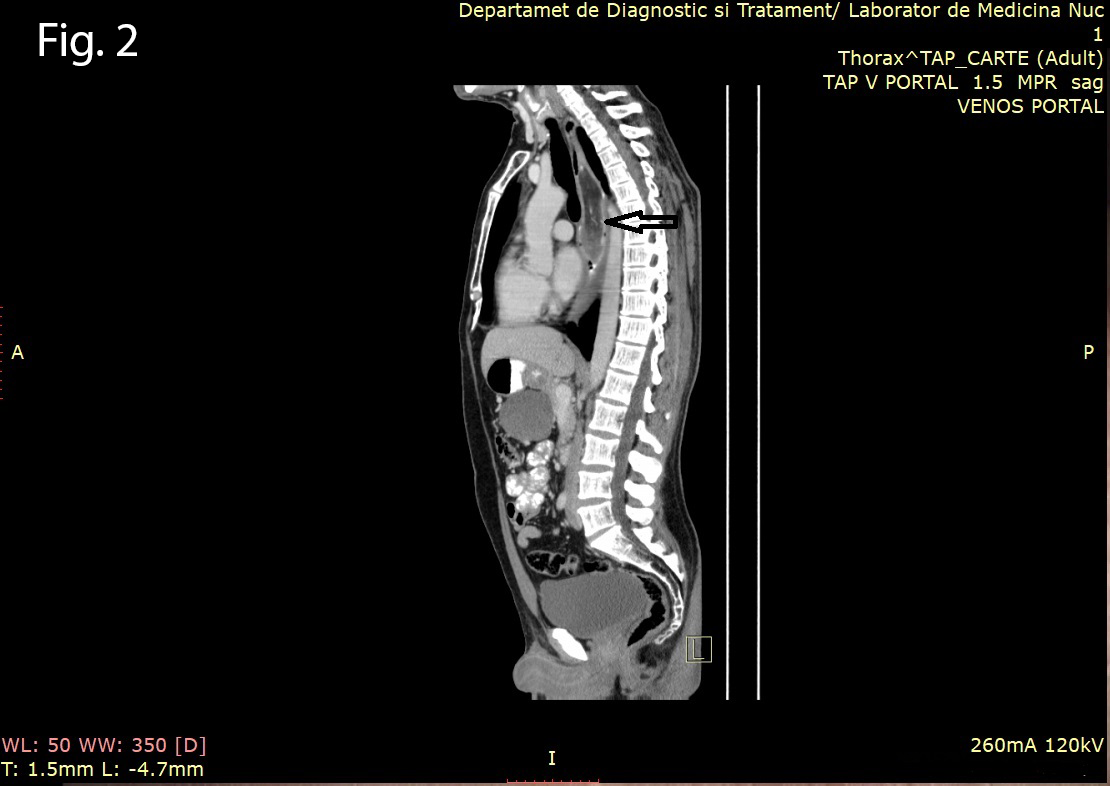 1Abstract
Esophageal lipomas are rare tumors, accounting for only 0.4% of all benign neoplasms of the gastrointestinal system. The majority of these tumors are located in the cervical part and just a few are located in the lower third of the esophagus (1). We present a case of a large pedunculated esophageal lipoma in a 46-year-old male who presented with dysphagia, regurgitation and a sensation of a lump in the throat. Upper gastrointestinal (GI) endoscopy revealed a pedunculated tumor mass within the esophageal lumen with its peduncle arising from the cervical esophagus. Endoscopic ultrasound (EUS) confirmed that the esophageal lumen was entirely occupied by a giant mobile lesion and computer tomography (CT) revealed the intraluminal pedunculated tumor mass.
2Case Report
A 46-year old man presented to the gastrointestinal clinic complaining of dysphagia, regurgitation and a sensation of a lump in the throat, symptoms which had progressively worsened over the previous year. Upper GI endoscopy revealed a giant soft mass within the esophageal lumen, with a smooth surface covering, originating from the cervical esophagus, with a positive ”squeeze sign” (Video 1). EUS was performed and showed a giant mobile lesion occupying the esophageal lumen, with hyperechogenic structure, suggestive of a lipoma (Figure 1ab). Contrast-enhanced EUS did not depict any signals inside the subepithelial mass in the early arterial or late venous phases(Figure 1c). In order to define the surgical approach, a CT of the neck, thorax and abdomen was performed and it revealed the submucosal pedunculated tumor mass, confirming the diagnosis of lipoma (Figure 2).
3Discussion
Gastrointestinal lipomas can be found anywhere along the entire length of the gastrointestinal tract; the esophagus is the least common site and accounts for only 0.4% of all benign neoplasms of the digestive tract [1,2]. Esophageal lipomas arise close to the upper esophageal sphincter, are usually slowly-growing, are solitary pedunculated tumors and they occur in adults, predominantly men [1,3.4]. The tumors are usually discovered incidentally, are small in size and the symptoms are correlated to the size of the tumor: dysphagia to solids is the most common when they are large enough (4,5).

In case of symptomatic patients and suspicion of an endoluminal mass, a correct diagnosis can be made using upper GI endoscopy, EUS and CT scan, although magnetic resonance imaging(MRI) sometimes provides superior results (6,7).

During endoscopy, one key finding is to observe a smooth and intact mucosa of the esophageal lumen. In addition, a pathognomonic sign for lipomas is the ”squeeze” sign - changes in the contour and configuration of the lesion as a result of peristalsis (8).

Biopsy is not advocated for esophageal lipomas (1,9) and thus EUS is used to determine the layer of origin of the tumor. It can clearly identify benign lesions, such as lipomas as they appear hyperechogenic (10).

For our case, upper GI endoscopy and EUS as well as CE-EUS supported the diagnosis of lipoma: the endoluminal mass was covered by a smooth mucosa, with a positive ”squeeze” sign, whilst EUS identified a submucosal hyperechogenic tumor without any vascularity.

Video 1. Videoendoscopy showing the pedunculated submucosal tumor with a large pedicle covered with normal mucosa originating in the cervical esophagus, with a positive "squeeze sign". The examination starts with withdrawal of the endoscope from the stomach, with visualisation of a soft mass in the left of the screen with normal overlying mucosa (00:50), with a long pedicle originated in the upper esophagus (1:30-2:00). The "squeeze sign" consists of shortening and thickening of the pedicle (3:10, 3:20) 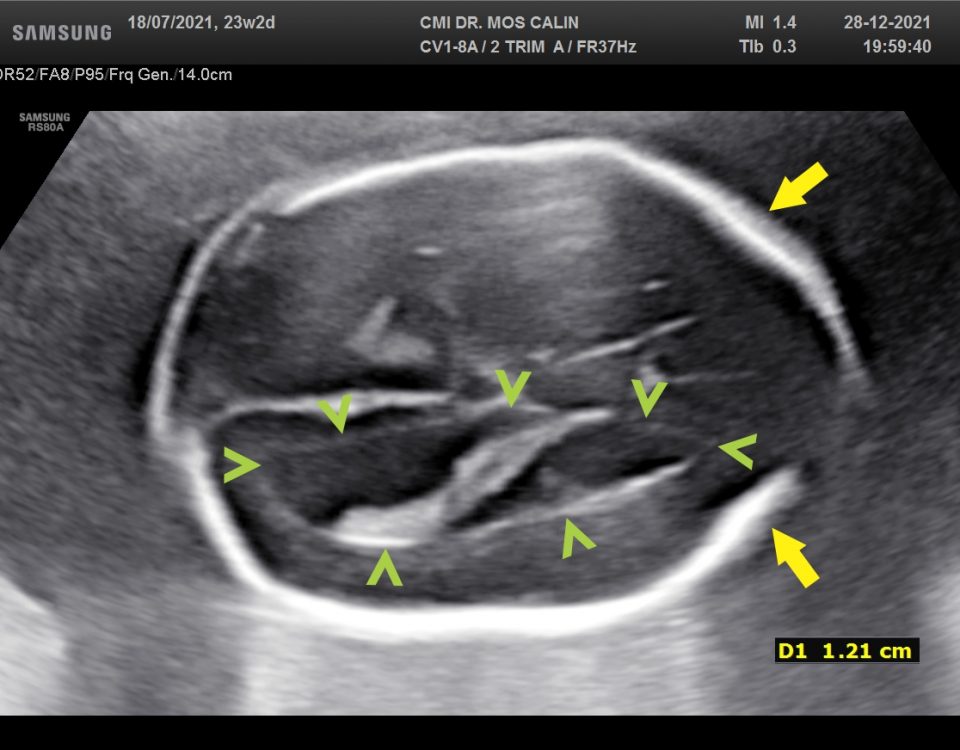