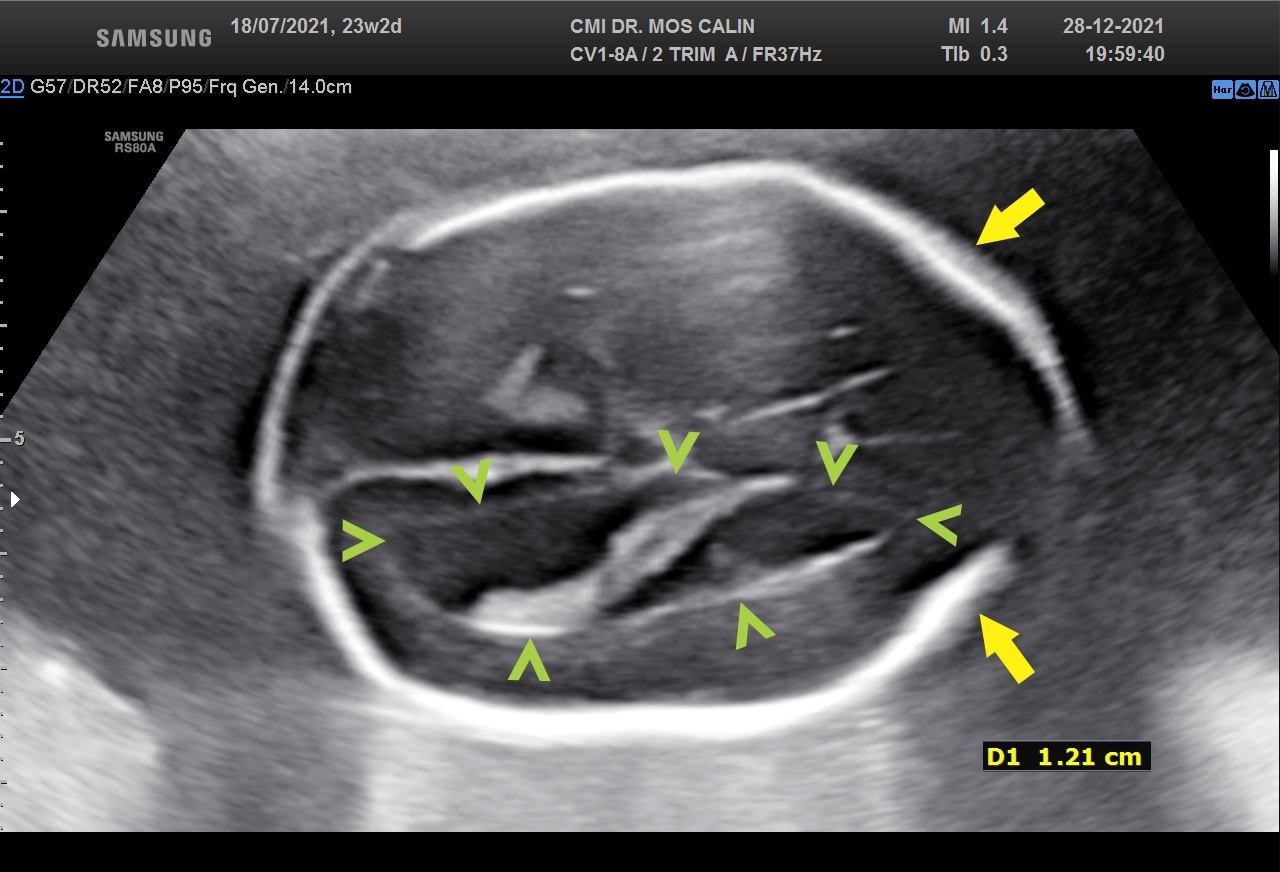 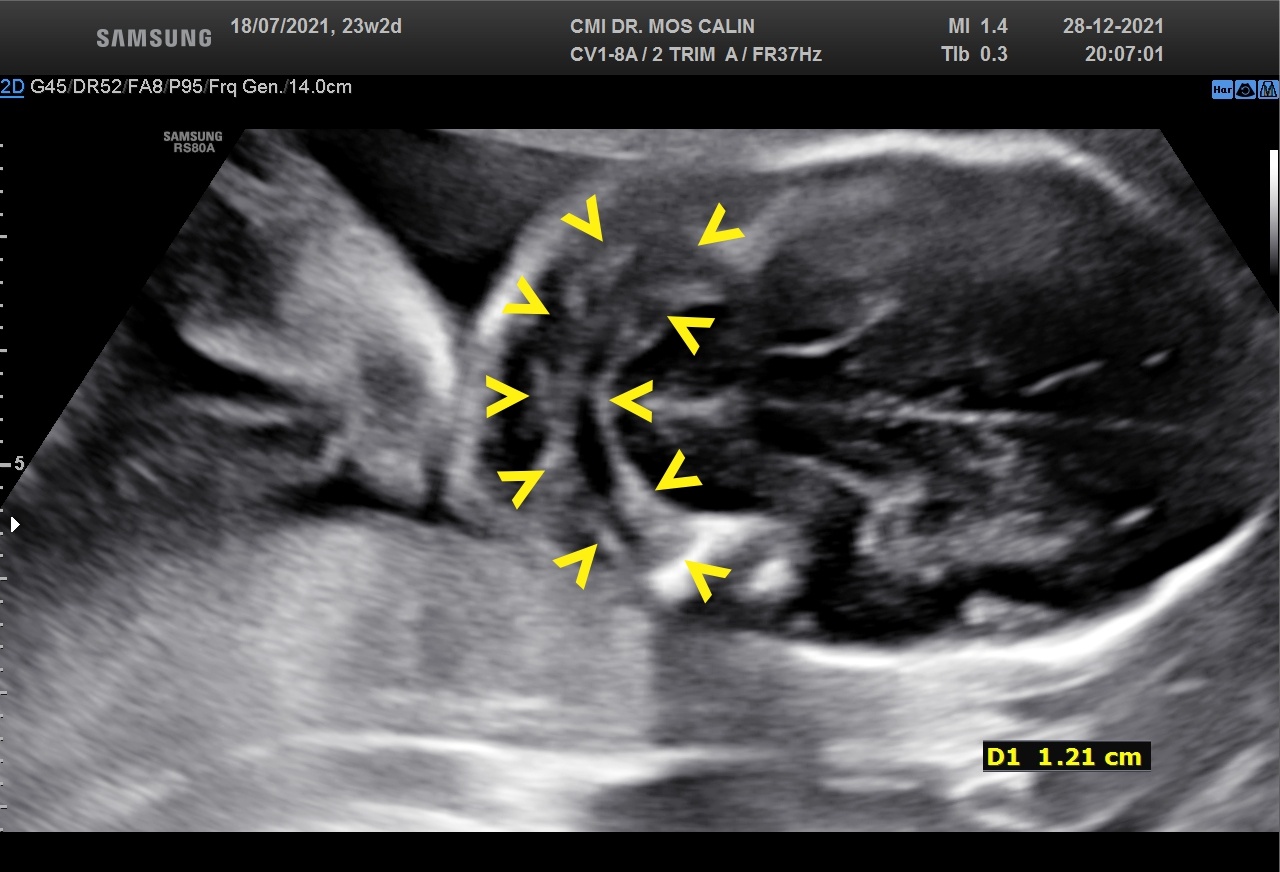 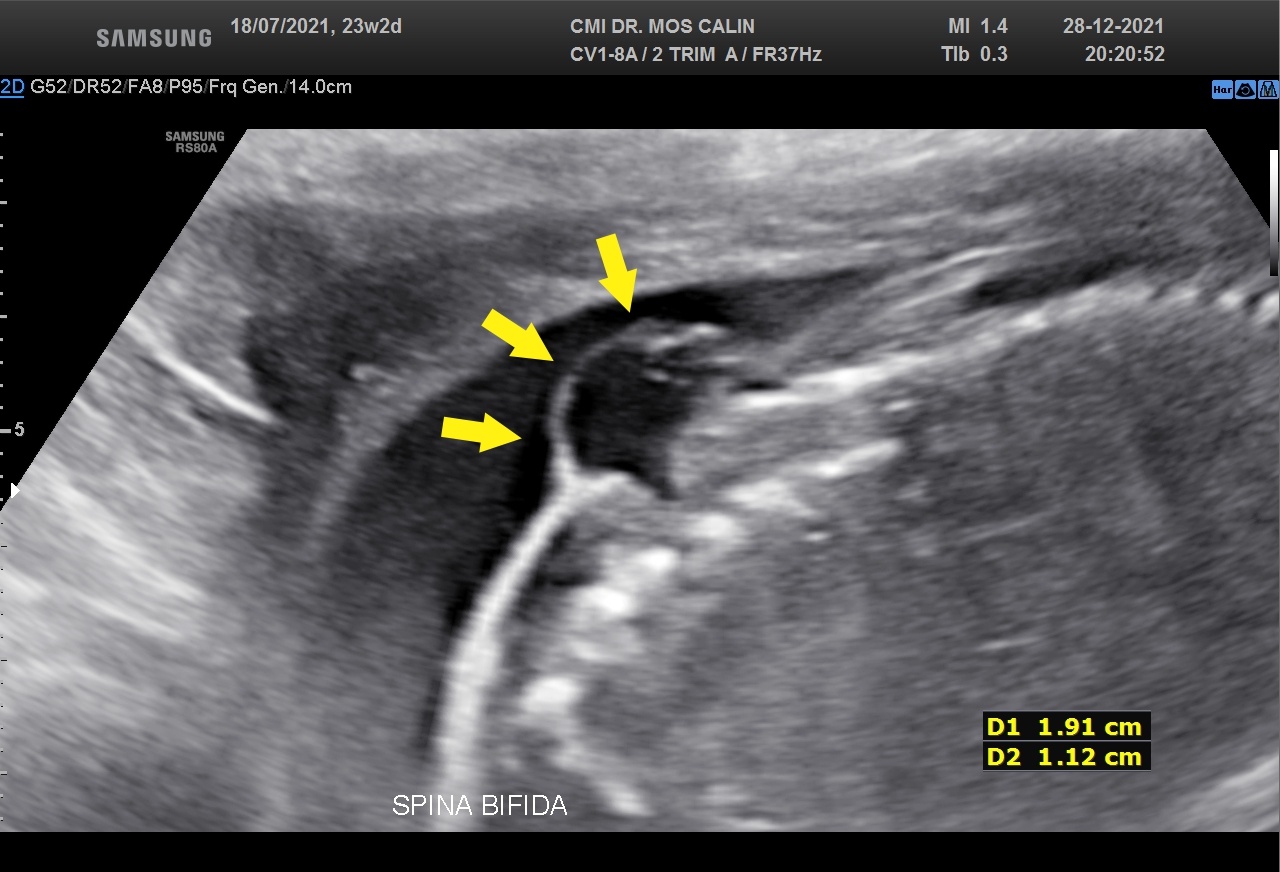 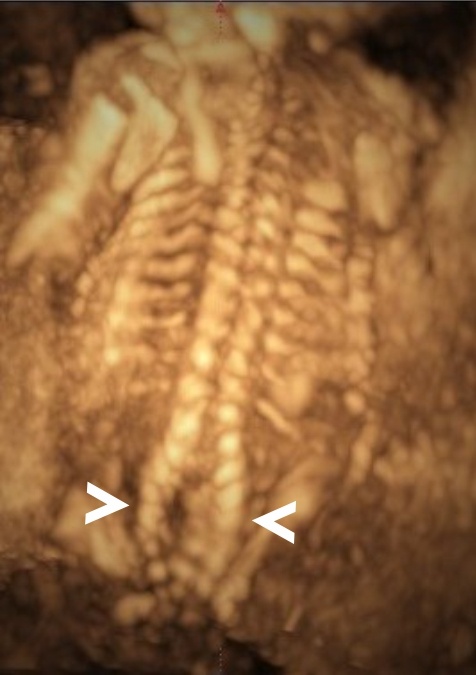 1Clinical History
A 27 year old woman (G2P1), with a chronology of 23 weeks 2 days, with unremarkable history was sent to our unit for routine second trimester screening.
2Image findings
Appearance of the lemon-shaped skull (lemon sign →) ( fig.1 ), traction of the cerebellum and brain stem to the medullary canal with an abnormal shape of the cerebellum (banana sign >> ) ( fig. 2), small posterior fossa and obliteration of the cistern magna, mild ventriculomegaly (12-13mm) (> fig.1) , myelomeningocele (cystic structure covered by a membrane in the lumbosacral region) (→ fig.3).
3Diagnosis
Open spina bifida with myelomeningocele (L3 - S4), scalloping of the frontal bones (lemon sign), prolapse of the cerebellum and brainstem in the medullary canal (Chiari type II or Arnold-Chiari malformation) and mild ventriculomegaly (12-13mm)
4Discussion
Background: Open spina bifida is characterized by a complete closing defect of the vertebral arches, adjacent soft tissues and skin. It is most commonly found in the sacral and lumbar regions. Almost invariably, maternal blood AFP (alpha-fetoprotein) is increased. Six ultrasound signs that are present in the vast majority of fetuses with open spina bifida: "lemon" sign, small cerebellum, effaced cisterna magna, small posterior fossa, ventriculomegaly and direct visualization of a spinal defect have been described. From an ultrasound point of view, in the spina bifida with an open defect, the cranial signs (appearance of the skull, cerebellum and lateral ventricles) are characteristic, easy to identify and suggest the diagnosis before visualizing the spine defect. Focused examination of the spine and identification of the closure defect and myelomeningocele confirm the diagnosis. The three-dimensional examination facilitates the identification of the upper level of the spinal defect ( > fig. 4)

Clinical perspective and therapy planning: In utero repair (by open or fetoscopic surgery) may be promising, but there are very few centers where it can be performed. Postnatal surgery of the defect usually improves the clinical symptoms, or at least prevents the worsening of the symptoms. If spinal nerve damage is present, surgery cannot repair it. Postnatal hydrocephalus requires the installation of a catheter through which the CSF drains into the peritoneum or pericardium (shunt).

Outcome: After birth, in open spina bifida, neurological problems are always present. Abnormal development of the neural tube generally leads to incontinence and immobilization in a wheelchair. Hydrocephalus can cause changes in the child's neuropsychological development. That is why abortion is an important option to consider. In Europe, about 90% of pregnancies are terminated after prenatal detection of an open spine defect.

Prognosis: In principle, the prognosis correlates approximately with the severity of the lesions, but an accurate prediction of motor and functional dysfunctions is not possible with ultrasonography.
5Teaching Points
Ultrasound signs in open spina bifida are specific and allow precise diagnosis in the vast majority of cases, especially if the examination is done in the context of increased AFP and in the time of morphology of the 2nd trimester (18-22 weeks). Identifying changes in the fetal head is easier than identifying the medullary canal closure defect.
6References
1. Nicolaides KH, Campbell S, Gabbe SG, Guidetti R: Ultrasound screening for spina bifida: cranial and cerebellar signs. Lancet. 1986; 12:2:72-74. 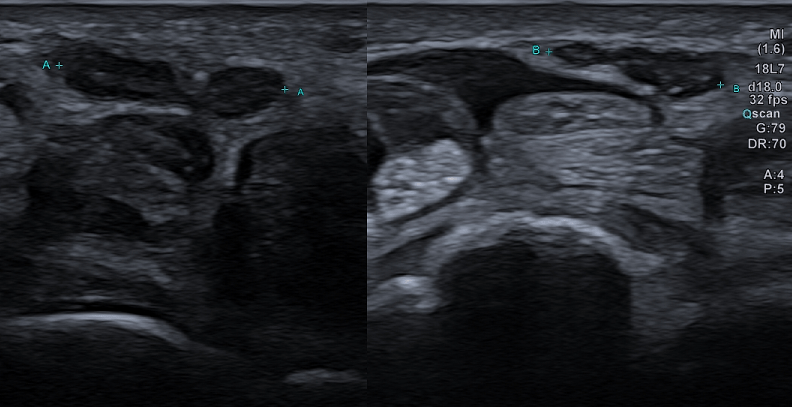